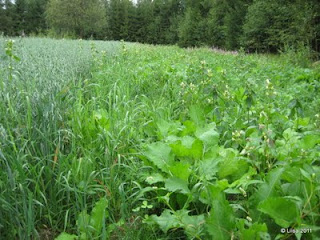 I wanted to see my old strawberry place on a hill nearby. When walking along the old path I noticed lots of leaves of arctic raspberry but I didn´t see any berries to pick up and taste. I still remembered their delicious mouth watering taste like yesterday, though. There was a ditch to cross and a bit farther away I saw an old blueberry place now shadowed by old spruces on my right. There used to be two fields up on the hill.

One of the corn fields was not discernible any more. I could imagine it quite easily because it was engraved in my brain. I decided to take a walk round the other one where I could see barley, oats and cabbage grow. While walking I had flashbacks and felt the heat of the sun and sweat pouring down my forehead during the haymaking just the way I did as a teenager. Now every single plant was covered by dewdrops.  It was early and the night had been pretty cold as usual at this time of  the year.  Maybe it wasn´t dew but the clouds were moving round the hillside. That was more likely.

The crop was not to be harvested because it was meant for wild animals. I could not see any reason to stay longer and so I walked down to the house. Just the moment I came out of the forest I noticed two young men walking on the path. They did not seem to have noticed me so far.  It is so rare to meet anybody in wilderness that I had to make a move. I shouted at them, which made them stop. After introducing myself I asked who they were and why they were walking by. That was something I would never do in town. I think I felt safer in the country. Besides, my husband and my brother were around.